I hated soul food because it reminded me of poverty. – Chef Rhodes

Described as “neo-soul food” and some of the “most innovative, socially aware cuisine,” Indigo is not just a great dinner, but a necessary dialogue.

Jonathan “Jonny” Rhodes and his wife Chana head Restaurant Indigo. It’s located next to a bodega in Houston’s Lindale Park / Northside, where the chef grew up. Rhodes went to culinary school at the Art Institute of Houston, spent some time in high-profile restaurants in NYC, and then returned to Houston to open Indigo in 2018, when he was consequently named Houston’s ‘chef of the year’ at only twenty-eight years-old.

Indigo is BYOB and has only 13 seats, with 2 seatings each night during the weekends.  I visited on a Saturday night, April 20, 2019, coincidentally during Houston Black Restaurant Week. The menu is prix fixe – $100 or $125, depending on whether you choose the Omnivore or the Pescatarian. The clientele was diverse, as is typical with Houston, but at this price range, the clientele was homogeneous in the sense of class.

Each dish is served in a beautiful ceramic bowl or plate made specifically for Rhodes’ restaurant, and almost every dish is cooked over an open fire rather than a gas stove. 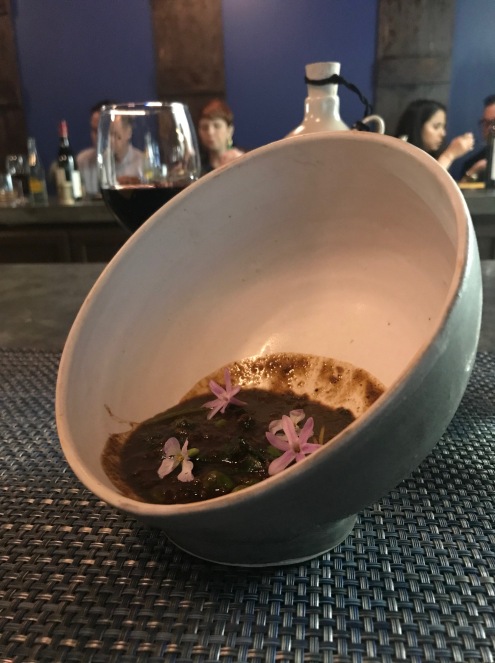 I consider soul food to be the food of the survivors of oppression. Neo-soul food is essentially the same thing, except for more modern times. For the people that are still currently undergoing oppression.

We tried both the Pescatarian menu and the Omnivore menu. My menu – the pescatarian – started with a dish called ‘Natural Disasters of the Heart’ – a snapping turtle soup, considered one of George Washington’s favorite dishes and one, of course, that was prepared and cooked by slaves.

The names of other dishes include ‘Convict Leasing,’ ‘Institutionalized,’ and ‘Slum Village.’ As each course arrives, Rhodes comes out to discuss it – not just what ingredients are used, but why he chose the name and the history of the ingredients. Rhodes uses his cuisine to show that many of the ingredients and dishes we love today come from African-Americans and to discuss uncomfortable issues such as food apartheid, slavery, and mass incarceration of black men.

The meal ended with okra coffee. It’s caffeine-free, as it’s made from okra seeds, and it tastes more like a tea. This drink was used as a substitute for coffee in the South during the Civil War, but okra is believed to have originated from West Africa, where it is called ‘gumbo.’ During the Slave Trade, this term and ingredient transferred to France and the American South, where gumbo soup as we know it today was born.

Like I said, we just didn’t want people to feel exiled or excluded or attacked. We wanted them to feel a part of this.

For more info on Rhodes’ dishes and his overall mission to bring more attention to the contributions and ongoing challenges of African-Americans, check out his Instagram, where he can turn a picture of an avocado into a conversation about economic inequality.

While some may prefer to enjoy their food without a feeling of guilt…or helplessness in the face of ongoing oppression…Indigo indeed serves something unique and brings up an important conversation in a rather palatable way.

Update: Indigo was closed in July 2021, so Rhodes could focus on a sustainable grocery store at the same location. 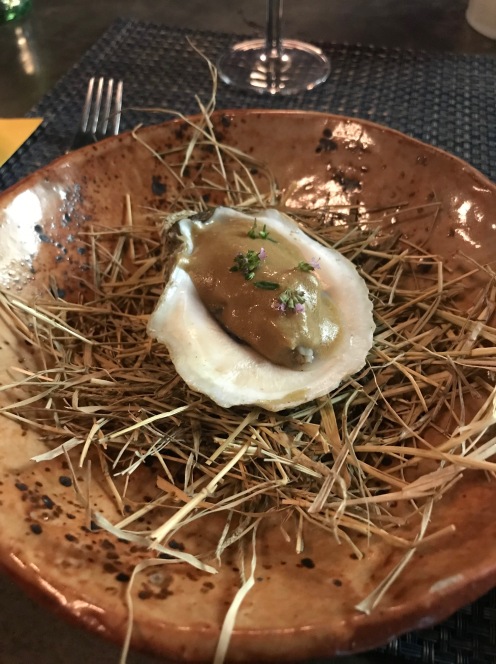